Having completed a 600km brevet, my next goal is to complete this Permanent, SR600, while I still have the form and conditioning as well as before the summer heat takes over.

The SR600 I'm participating is organised by Saitama Audax and the official name is Super Randonee Fuji. There are two categories, Randonneurs and Tourist Cyclist. Randonneurs limit time is 52 hours and for Tourist, the minimum requirement is to cover a distance of 80 km per day. I registered for the Randonneurs Category and the total climb for this event is around 11,105 meters.

Not sure if I can finished under the time limit but worth a try.

Posted by Jayves at 2:48 PM No comments:

After a failed (DNF) 400 km a few weeks ago, I wasn't sure if I had the conditioning to complete a 600 km brevet and so I started with low expectation. This is also my second official brevet so far. I haven't (I would if I could) registered officially 200km and 300km due to popularity and high demand. However, I have shadowed (ridden a brevet unofficially) a couple of times. One in January and second after the Hay Fever season just to check my conditioning.

BRM608Aoba600 starts relatively late around 7:00 and when I arrived, the briefing has already started. Waited for the briefing to finished before registering and went straight for the the equipment checks. Didn't have much time to socialised except a small sync up with the organiser regarding the previous 400km that I DNF. As expected, there were *lots* of DNF as well as mechanical troubles.

The first 120km was relatively flat and with the usual urban traffic, a little bit tough to put time on the bank. After two control points, real climbing starts. The first climb is the old road to Karuizawa. The gradient is gentle but nevertheless a long slog. After the climb, I didn't stopped and continued on, enjoying a bit of descent and to the next checkpoint just before the next big climb to Nobeyama. Amazingly, there was still sunlight on the descent from Nobeyama. So far all of my brevet passing thru Nobeyama has been in the dark, mostly before or after midnight. A little bit refreshing and enjoyed the long rolling descent to Minobu, along the mighty Fuji river. At around 300km, I slept in front of Minobu Train Station around for 3 hours. After a short nap, I continued the downstream course down to Shimizu where I had a proper breakfast. By now the morning sun is already well above the horizon and now more traffic lights to break the cycling rhythms.

By the time I reach the start of the next climb in Izu (Amagi Pass), I felt so tired and sleepy that the climb was a struggle. This was the time I was thankful that I have my triple crank and used the granny most of the time. Took a short rest at a parking station before the final push, then enjoyed the long descent to Kawazu and a longer break at the control point, eating lunch by the riverside under the shadow of cherry trees.

The last 150 km (from Kawazu) was a traffic nightmare. Weekend vacationers all pouring to the one national road back to Tokyo. It wasn't fun but nevertheless, need to keep pushing on these nasty ups and downs of East Izu roads. By this time, the drowsiness has gone and the focus is on getting back home on time. I remember, I haven't taken food for the last 4 hours but felt OK. No low glucose symptoms at all.

I finished with less than 90 minutes before the time limit and was greeted with congratulation greetings  from the organiser as well as a reminder that I still have more DNF than Finishes!  Ouch!!

Having DNF the 400km brevet ride last weekend due to bad weather, I needed a bit of long serious ride as training ride before next month 600km brevet. I decided to do Mt Fuji loop and using first portion of last week 400km brevet course to give my legs that big mountain muscular endurance.

Left very early around 3:30AM and this should provide the dark/sleepy riding acclimation needed for my next brevet. The weather was forecasted to be sunny, but I didn't get the sun until afternoon. The south side of Mt. Fuji was mostly foggy and cloudy.

The ride was tough but was able to ride almost continously expect for a few hunger pang stops and nature breaks.

Hope the weather will cooperate on the next big one. 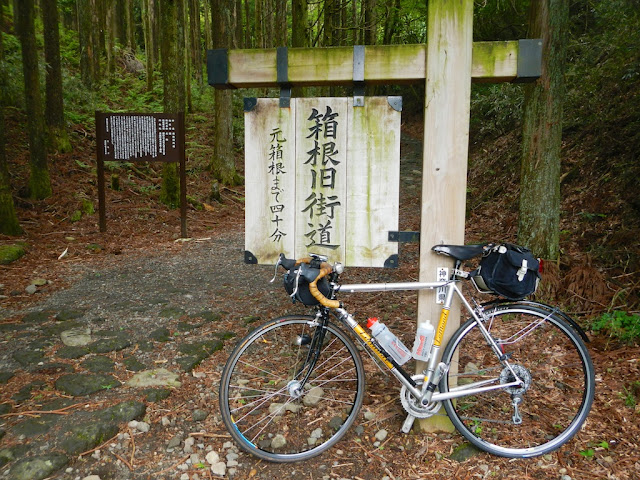 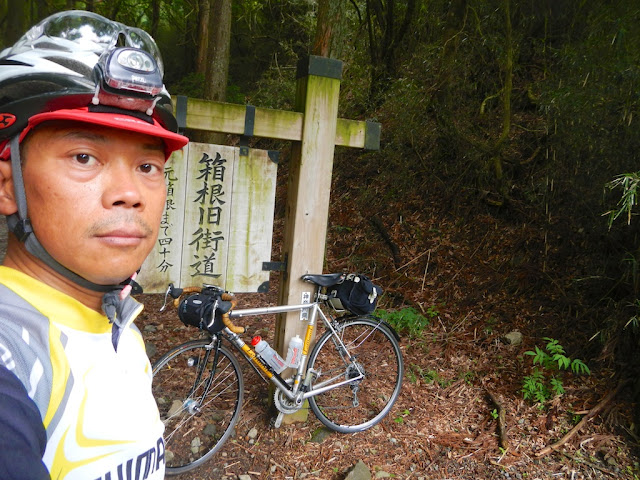 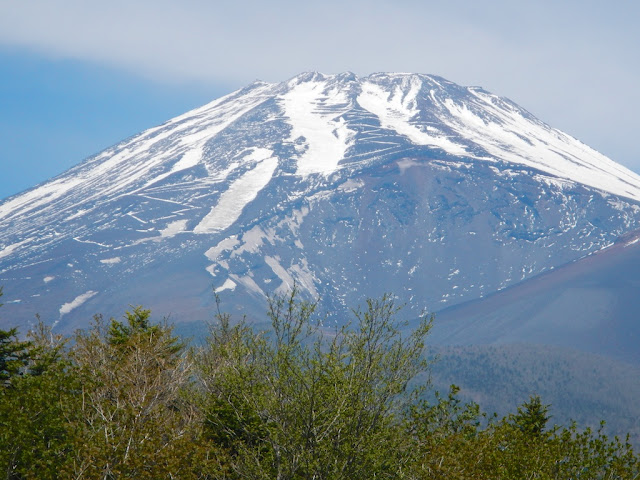 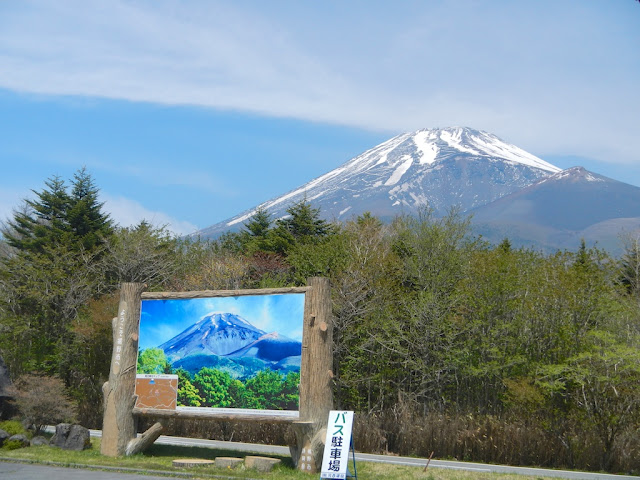 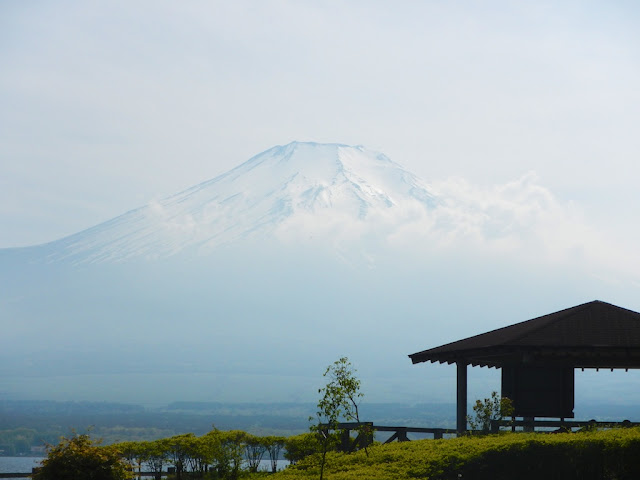 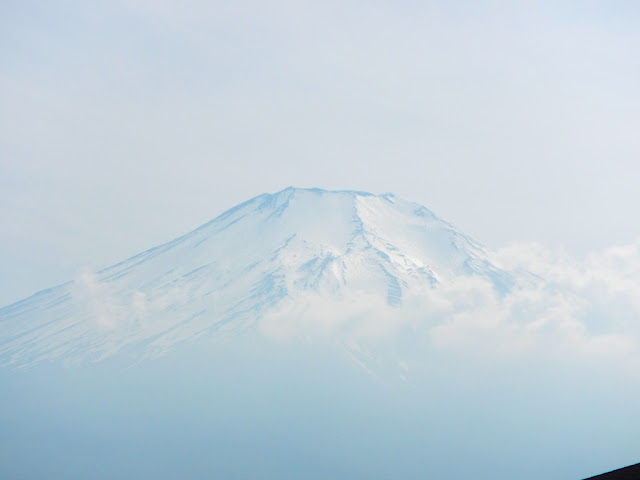 Posted by Jayves at 7:15 PM No comments:

I was fortunate enough to be a recipient of a Titanium bike frame from Tom, who owns this famous blog. It is a very nice and well maintained frame but it just need a little fixing!

This was the picture posted by Tom when it was up for grab. It has a narrow clean crack on the outside seat stay. (During welding, it was found to have another small invincible crack on the inside opposite the visible crack).

I was interested in Tom's frame but not sure if it could be fix and if fixed, is it reliable to ride. I remember there are lots of small specialized shops on one of the small cycling/jogging riverside near my place and I was able to find a small welding shop that does also Titanium. I talked to the shop owner and he said it was fixable but would not guarantee it's safety. I was a bit concerned first but then I figure I can use it as my indoor training bike. I then send a message to Tom and mentioned I was interested. We arrange a pick-up date/time and I got the frame.

I quickly went to the shop for the welding and the owner was very nice and the place looks very professional. He does welding on a lot of different metals and fixes almost anything. Here is the quick video of him working on the metal.

And here is the finished weld. The colour characteristic shows an excellent weld. Well done! I highly recommend this guy.

I named the new born again titanium bike 'Rare One'.

I slowly ramped up the forces on the stays and it hold up pretty well. After a few months of testing on different terrains and forces on the pedals, it stood up to the test of time. Now it is one of my stallion and has proven itself and already broken a few Strava segment personal records.

Posted by Jayves at 6:56 PM No comments:

Late in coming but well deserved 2012 brevet accomplishment (Yes, the medal says 2011). My first but certainly won't be my last Super Ranonneur medal. Probably becoming harder to get because of brevet popularity. This year, I can't even register for 200km because it's full! 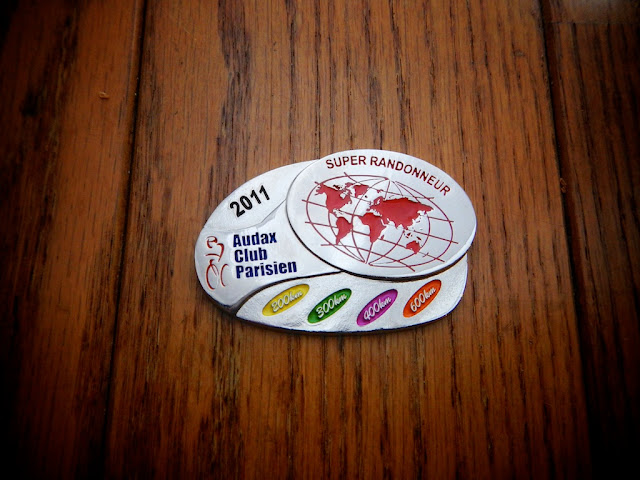 Posted by Jayves at 6:52 PM No comments:

It was midnight on Dec 7, 2012 as I waited patiently to register for this brevet via SportsEntry only to be refused registration due to full booking. I thought that was fast!  It was confirmed by one of the organiser at the end of this brevet that it just took 3.5 minutes to fill up the slots.

Anyway, I wanted to start the brevet season early and not able to booked didn't discourage me. So I did a 'shadow ride', meaning joined the brevet ride unofficially. The plan is to ride as a real brevet following all the rules (OK, not all traffic rules) except for the reflector vest. I didn't want to be mistaken as a participant but still enjoy the company of them. Without the reflector vest, I have the freedom to take shortcuts, etc and will not be subjected to my fellow official participants scrutiny/complaints. In addition, I will not give the brevet and it's organiser a bad image if I break some of the rules. It is difficult to run the brevet anonymously because I know few people and some organisers. I was recognised too quickly for comfort.

I was joined by four other riders (Joe W, Elbert Y, Danny A, Yolie V). Except for Joe, the three are members of Tokyo PADYAK cycling group and their first experience to ride a brevet (albeit unofficially).

We started right after the brevet started around 7:10AM. We were greeted by the orange morning sun view of Enoshima. The air was crisp and the perfect view of Mt. Fuji. The pace was civilised making sure that the group stays together. The course is 50/50 split between flat and hilly, with the first 50km flat, the next 100km hilly and the last 50km flat again.

The group tried to stayed together but from the last 10 km to the turning point (~100km control point), we were split riding our own pace in this hilly segment. We rested at the turning point and had a quick lunch before turning back to Zushi on the same route.

I was expecting a headwind on the return leg but it was nowhere to be felt! Our ride was timed on the perfect winter day without the nasty North Wind. It was still cold but manageable. The group was still strong on the return leg and was impressed with the pace given that some of the riders are riding this long distance event for the first time! Impressive and I don't remember doing the same pace in my first 200km brevet!

We all made it back to the goal within the official time limit. That was a nice accomplishment!

We finished with a group Ramen dinner before parting ways eager to have a good bath and sleep.

Finally, I got all my brevet cards needed to apply for 2012 Super Randonneur and applied promptly. I expect the medal to arrive early next year.

This also means that I have collected the 4 medals, one for each distance event.